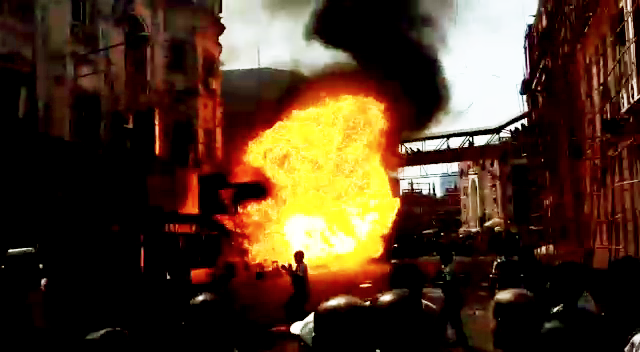 A fire broke out near New Market, Kolkata early this morning, at a restaurant on Hogg Street, which is not only famous for being the home to some of the oldest and most renowned Mughlai restaurants in Kolkata, such as Aminia, Nizaam etc, but also hosts the Kolkata Municipal Corporation (KMC) building across the street. Just take a look at this video that is doing the rounds in social media, documenting the raging fire inside this yet to be a confirmed restaurant. According to the video, it appears to be either Cafe Abdullah or Kusum Roll Centre that is on fire, although there is no confirmation as of yet.

On 9th November, at about 10:25 am, the fire was said to be initiated because of a cooking cylinder blast, according to police reports. The locals informed the Fire department and within 30 minutes, three firefighters came to the rescue. Since the place is a restaurant, and there was another cylinder inside, the explosion you see takes place just a few minutes after the firefighters came in. No casualties have been reported as of yet.

The area where the fire broke out is surrounded by several old and renowned restaurants and bars. The concern is what would have happened if any of these restaurants caught fire as well. If that happened to be the case, then things would have taken a turn for the worst. Safety concerns in these areas need to be taken much more seriously, given that this is one of the busiest areas of the city.

A couple of days earlier, a godown in Burra Bazar was on fire which, although disastrous in its own right, seems like more of a regular trend in Kolkata bazars nowadays. However, when an explosion of such magnitude occurs in restaurants, which are packed with highly flammable items all the time, and that too in a busy place such as New Market, it’s high time that the safety standards for food joints in the city are updated. Not only for the safety of the people but also to preserve this age-old heritage gastronomical hotspots in Kolkata.