HIV positive, these two words still stir somewhat fear in our heart. Our society does not take an idea freely at the first attempt and the best example of this is how we used to treat HIV Positive patients. We used to alienate them without understanding that this is a mere dysfunction in their health and they have nothing to about it except getting treated; and the infamous social campaign of Government of India, “Chune se nehi fahalti”. But we still make it point to be scared and make them feel small about their illness. They are not expected to have any earthy expectation from life, let alone marriage and having a family. We just see them mourning and slowly giving up to the creeping end.

Anil Valiv. a Transport Officer from Delhi took this opportunity and turned it into a revolutionary idea. He launched a matrimonial site for HIV positive people. Yes, it is now possible, marrying someone with terminal cancer or HIV. HIV treatment has grown with time, now an HIV Positive patient not only can live, he or she can live and have a normal life with the help of proper treatment, and the transmission of the disease from a mother to her baby can be avoided too. We also as a society has come a long way since the “Chuune se nhi Falti” days and we now are aware of the fact that it is a disease and it has it’s own way of transmission and not by touching. The family and friends of HIV Positive disease are now more supportive and friendly. 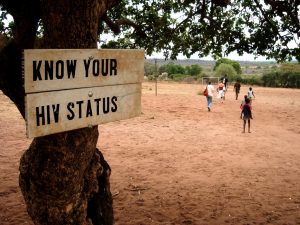 In the year of 2006, Anil Valve made the platform for HIV Positive patients. Near about after a decade, a guy named Dhananjay made another matrimonial site in Bangalore, which has departments in Kolkata and Gurugram. Along with a platform for HIV Positive people they have a different segment for Thalassemia patients, Cancer patients and much more.

In a country like India where being HIV Positive is still a taboo putting up their real name and all the details uninhibitedly, it is no less than a revolution. They are putting their detail and finding other people who are on the same page and they have nearly 2,500 successful matchmaking till date. Wish the people all the best and let everybody know about this wonderful drive.